The detached home segment of Vancouver’s housing market has been walloped as sales for this home type in the first two months of the year sunk to the lowest levels since 1990.

A mere 98 detached homes were sold in Vancouver proper this February, notes Vancouver realtor Steve Saretsky in a blog post.

“The price correction in Vancouver’s detached housing market has been a slow bleed, it has been nearly three years since prices peaked out in the spring of 2016,” says Saretsky, the founder of Vancity Condo Guide.

Owners of detached homes have been refusing to lower prices despite market forces putting downward pressure on price expectations. “There are economic/housing studies which illustrate sales volumes peak two full years before prices start to fall, and Vancouver seems to be a real life example of this psychological phenomenon in which sellers stubbornly anchor to peak prices,” he writes.

Benchmark prices are said to more accurately reflect real market trends because they are based on price changes between typical properties in a given area based on elements such as square footage and the number of rooms in a home. Price extremes at either end are removed. 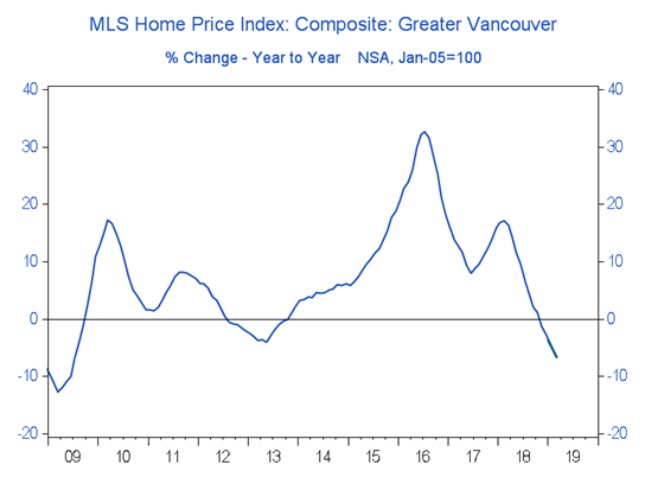 A separate note from BMO suggests prices won’t be on the road to recovery in the months ahead. “And so the adjustment to higher interest rates, OSFI rules and past provincial government measures continues…” concludes BMO Senior Economist Robert Kavcic, noting detached home prices in Greater Vancouver were down almost 10 percent on a year-over-year basis.

In addition to factors Kavcic outlines, it appears demand from foreign homebuyers, who were said to be more active in the higher-end detached segment in Vancouver, has evaporated. Juwai.com, a real estate portal that lets Chinese homebuyers search for international properties, says it is receiving fewer enquiries from Mainland China concerning Vancouver properties.

While market activity is expected to pick up this month, Saretsky suggests it’s no cause for celebration. “That is a normal seasonal uptrend and unfortunately is likely nothing to get too excited about,” he says.